Instantly watch
The full scene in HD now.
Don't wait. Join today!
Sign Up Now
Brooklyn Springvalley is wearing a bikini and shorts when she walks up the stairs to the bedroom. There are several monokinis on the bed that she is going to try on. As Brooklyn puts on each one and checks out how it looks on her superstacked body and megaboobs, she gives her opinion about it. Which one would she wear to the beach? As you know, someone is always hiding a sex toy behind our model's pillow, and this time, it's a dick-shaped dildo that Brooklyn sucks and plugs herself with after she puts on the last monokini. SCORELAND: So, Brooklyn, are any big-bust models, present or past, an inspiration to you? Brooklyn: Past: Tiffany Towers, Pandora Peaks, Angelique Dos Santos. Present: Heather Harmon, Ariane Saint-Amour, Juliette Michele, Anastasiya Berthier. SCORELAND: Do you drive? Do seat belts fit you comfortably? Brooklyn: I drive, and I use an additional buckle I picked up on Amazon to keep the belt in the right place. Otherwise, it tries to slide up and strangle me. SCORELAND: If you had three wishes, what would you wish for? Brooklyn: Superpowers, boobs I can change the size of at will and for dogs to have human lifespans. SCORELAND: Do you do things like cleaning or watching TV at home topless or naked? Brooklyn: Sometimes I'll cook or watch TV in nothing but pasties and underwear. But only if it's warm enough. SCORELAND: Do you find yourself touching your boobs without thinking about it? Brooklyn: All the time.
Watch the Complete Scene Now
Starring: Brooklyn Springvalley
Duration: 18:35 Mins. of Solo Action! 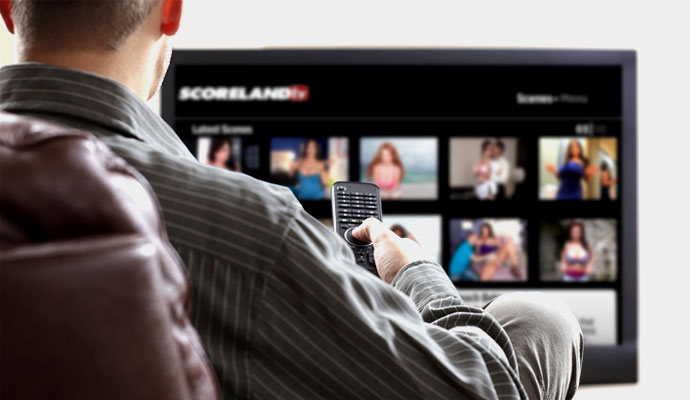